@party 2018 saw the release of Cratered, what I consider to be my best demo work, to decent audience acclaim. This post will sketch out my design process for the demo.

This post is, of course, 3 years late. I meant to post it back then but got carried away with other projects. 2021 got me feeling the demoscene vibes again, so I dusted off foguete and gave it a whirl, picking up where I left off.

Since this is all unpaid work, it pays to keep things as easy as possible. I want to be able to pick this code up as quickly as possible after not having looked at it for 3 years, and having forgotten most of the details of how it works. Minimizing the time spent reading the code and trying to understand it is paramount.

One thing I’ve noticed about being forced to read and understand old code is that the longer the file, the more unpleasant the process is. I’ve found that once a module crosses the 1000 LOC line, it gets dramatically less fun to work with. Modules below 500 LOC, by contrast, can be a pleasure - they are easy to read, understand and change. I suspect the unpleasantness is super-linearly related to LOC; perhaps quadratic or worse.

Another thing I’ve noticed is that working code is hundreds of times easier to debug and maintain than broken code. If I can at least see the thing run, I’ll know whether or not a change breaks it. To this end, I’ve tried to make heavy use of composition in the cratered demo, treating scene modules as building blocks. Each one is individually testable/viewable, and then included into a higher-level scene. The leaf nodes are then nothing to worry about provided they’re kept small. They can be developed and tested in isolation, and may even be put aside as “good enough” with incomplete inplementations as mockups in an unfinished prototype.

Here’s a dependency graph of most of the modules used in cratered: 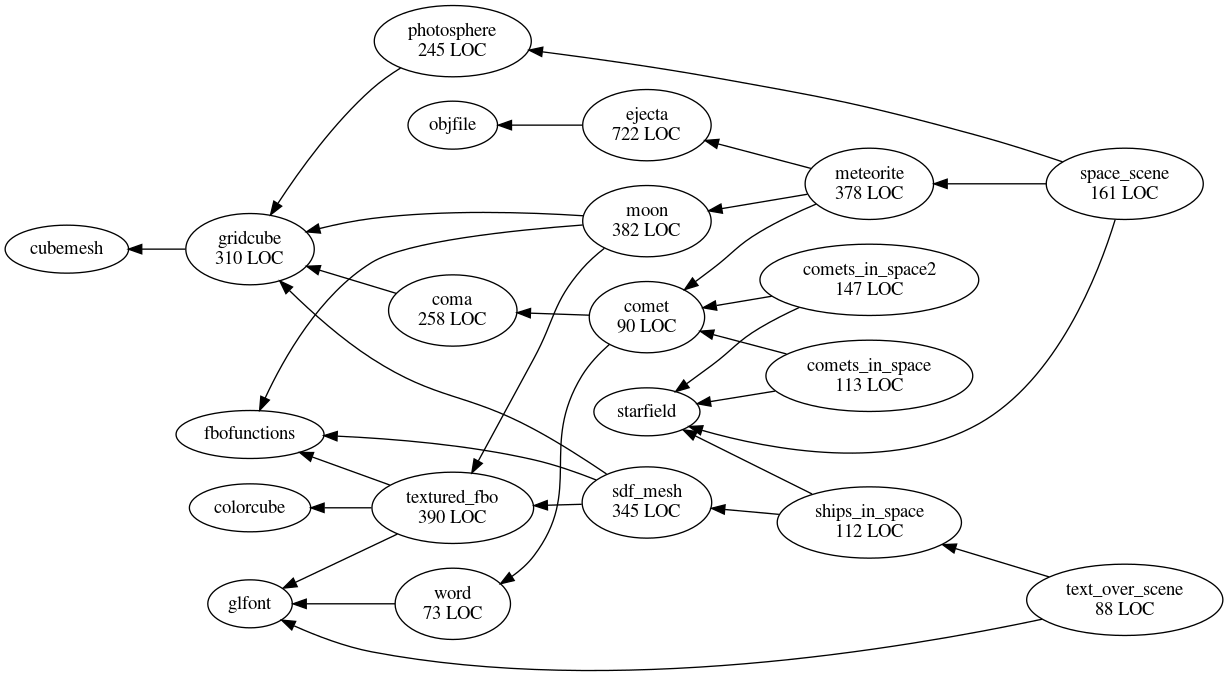 My intention was to break up functionality into manageable file units. Something like OOP - each lua file is basically a subclass of scene(with initGL, renderEye and update functions).

Looks like it got about 6 modules high or so, which is pretty cool. I have the impression that we can keep going up almost indefinitely - I’ve yet to see where this breaks down. Most of the modules are deliciously small, which keeps them fun to use and re-use. Modules are also built to operate standalone as much as possible, effectively acting as their own unit tests.

There is some coupling between modules, with modules “reaching in” and poking around with the data in the modules they include. Some API/interface is worth adding in the child modules to ease the job of whatever’s trying to drive it.

I’m seeing now that there seems to be unnecessary duplication, particularly starfield. I’d rather have just one of those, and add it to the end of a draw list, with some kind of top-level scene container holding that list… And I’ve always felt that “container” scenes should be codeless, somehow, and consist of just a simple list of scenes.

Composition eases the sporadic development as long as components are kept magageably small.